Presented by Ecolab, the ambassador of hospitality award celebrates Fieri’s lifetime of support for advancing restaurant workers and the industry

WASHINGTON, DC – December 15, 2021 – Guy Fieri, chef, restaurateur, and Food Network Emmy Award-winning TV host, has been named the 2021 Thad and Alice Eure Ambassador of Hospitality by the National Restaurant Association Educational Foundation (NRAEF). Presented annually by Ecolab, the Ambassador of Hospitality is the NRAEF’s most prestigious honor presented to an outstanding leader, advocate and role model for today’s and tomorrow’s restaurant workers.

Fieri was selected by a distinguished panel of judges, which included NRAEF and National Restaurant Association trustees and board members. In addition to his many years of dedication and commitment to community service and the industry, Fieri is being celebrated for his tireless support for restaurant workers and operators during the pandemic. 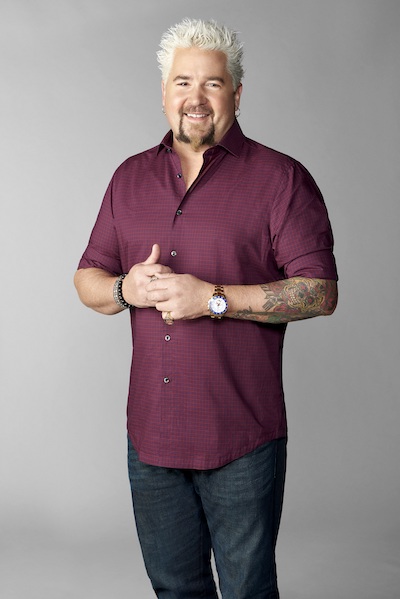 In 2020, he championed the NRAEF’s Restaurant Employee Relief Fund (RERF) which raised more than $21.5 million in financial aid for over 43,000 unemployed restaurant workers, and co-directed Restaurant Hustle 2020: All on The Line, a Food Network documentary about four chefs trying to stay in business at the start of the pandemic.

The Guy Fieri Foundation has served more than 120,000 meals from its “Rescue Trailer,” a mobile kitchen that served meals to firefighters, rescue and relief workers during the California wildfires as well as hospital workers throughout the state. Fieri is also committed to supporting military service members and veterans and has entertained and cooked for troops in the Persian Gulf.

“I’m truly honored to receive the Thad and Alice Eure Ambassador of Hospitality award from the National Restaurant Association and the Educational Foundation. Restaurants feed more than just our stomachs, they nourish our communities, and supporting the hard working people behind these businesses is more important now than ever,” said Fieri.

”Guy’s leadership and quick action to help thousands of restaurant workers and operators perfectly represents the true spirit of the Ambassador of Hospitality award,” said Rob Gifford, president, NRAEF. “During these challenging times, Guy’s mission to support our industry and restaurant workers from all backgrounds is more important than ever. He is an inspiring leader and exceptional example for us all as we work together to get our communities and restaurant workers back on their feet, and back to building futures in this industry of limitless opportunity.”

“We congratulate Guy Fieri on this award–a worthy winner who continues the great tradition of exceptional leadership and advocacy in the restaurant industry,” said Greg Cook, Executive Vice President and General Manager of Global Institutional for Ecolab. “Through thick and thin, Guy has championed the unique voice of restaurant workers, and the pandemic has been no exception. We’re proud to have partnered with him on the Restaurant Employee Relief Fund and thank him for his dedication to raising awareness and donations for this important cause.”

Established in 1987, the NRAEF Ambassador of Hospitality award is named for Thad and Alice Eure, industry icons and founders of the famed Angus Barn in Raleigh, N.C. The Eures embodied exceptional character and leadership and devoted their lives and resources to advancing the restaurant industry along with creating opportunities for people everywhere. “On behalf of my parents, I’m proud to present the Ambassador of Hospitality Award to Guy, who so beautifully reflects their ideals,” says Van Eure, owner of Angus Barn.

The Ambassador of Hospitality award caps off the NRAEF’s three-month Restaurants Advance: Journeys that Inspire series of real-life stories about restaurateurs persevering during the pandemic and advancing the industry through diversity, equity and inclusion, community service, and leadership. The Journeys That Inspire series is presented by longstanding NRAEF and National Restaurant Association supporters – PepsiCo, American Express, and Ecolab.

More about Guy Fieri – Chef, restaurateur, New York Times Best Selling author and Emmy® Award-winning TV host, Guy Fieri, is one of the world’s most recognizable and influential culinary stars. In 2019, Guy received a star on the celebrated Hollywood Walk Fame, a rare feat for a chef.

Guy began his love affair with food at the age of ten, selling soft pretzels from a three-wheeled bicycle cart he built with his father called “The Awesome Pretzel.” After selling pretzels and washing dishes for six years, Guy earned enough money to pursue his dream of studying abroad in Chantilly, France, where he gained a profound appreciation for international cuisines and further strengthened his passion for food. He returned to the US and graduated from the University of Nevada Las Vegas with a degree in Hospitality Management. Upon his graduation, Guy jumped headfirst into the restaurant business, ultimately opening his own casual dining concepts in Northern California.

Additionally, Guy and his team at Knuckle Sandwich, LLC, have created a thriving food and beverage empire. He recently launched Flavortown Kitchen, a 175-location virtual brand to complement his eighty plus scratch kitchen restaurant concepts worldwide. In addition, he’s partnered with legendary rocker and spirits pioneer, Sammy Hagar in Santo Tequila. On land and at sea, from the Las Vegas Strip to the Atlantic City Boardwalk, from South Africa to Colombia and from Costa Rica to Dubai, Guy’s culinary and spirits creations are enjoyed globally, every day.  Guy believes that giving back is one of the most important things you can do. “I was raised to always help your community, to always help people who need help, and to participate. You have to be an active member.”

About the National Restaurant Association Educational Foundation:
As the philanthropic foundation of the National Restaurant Association, the National Restaurant Association Educational Foundation’s mission of service to the public is dedicated to enhancing the industry’s training and education, career development and community engagement efforts. The NRAEF and its programs work to Attract, Empower and Advance todays and tomorrow’s restaurant and foodservice workforce. NRAEF programs include: ProStart® – a high-school career and technical education program; Restaurant Ready – partnering with community based organizations to provide opportunity youth and previously incarcerated individuals with skills training and job opportunities; Military – helping military servicemen and women transition their skills to restaurant and foodservice careers; Scholarships – financial assistance for students pursuing restaurant, foodservice and hospitality degrees; and, the Restaurant & Hospitality Leadership Center – providing standardized apprenticeship programs across the industry.
For more information on the NRAEF, visit ChooseRestaurants.org.