The restaurant industry has been devastated by the economic impact of the COVID-19 crisis, with workers across the nation losing their jobs and livelihood due to forced business closures. The Restaurant Employee Relief Fund has been created to help those struggling workers, with 100 percent of the monies raised going to impacted restaurant workers. Founding Partners of the Fund include PepsiCo, Uber Eats, Constellation Brands, Moët Hennessy USA, Ecolab, Cargill, Boston Beer Company, Shift4 Payments, P&G Professional, The Elliot Group, Davis Wright Tremaine LLP, and the Light Foundation.

“Early estimates indicate that as many as five to seven million restaurant workers may lose their jobs due to the COVID-19 crisis, and many already have,” said Rob Gifford, President of the NRAEF. “In the face of this pandemic, we are asking the nation to join us in protecting vulnerable restaurant workers through your generous financial support. Please donate online immediately at RERF.US so we can help those in need.”

“My entire career has been in the restaurant business,” said Guy Fieri. “From bussing tables to flambe captain to dishwasher to chef… I’ve done it all. I’ve also spent the better part of the last 15 years traveling this great country meeting other folks who’ve dedicated their lives to this business and let me tell you something, they are the hardest working, most real deal workers you’ve ever met… the heartbeats of their communities. But they need our help and with Restaurant Relief America, we can serve up some support when these restaurant employees need it most… right now.” 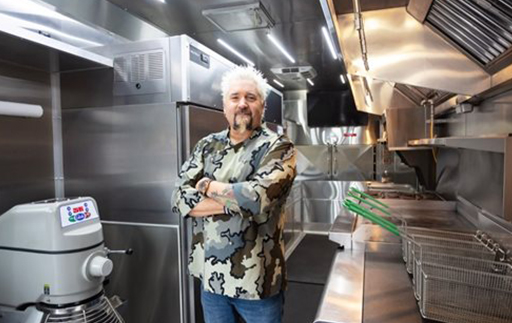 “Foodservice workers are facing unprecedented financial challenges and need support for everyday needs such as housing, childcare, and groceries,” said Anne Fink, President of PepsiCo Global Foodservice. “We need to provide relief to our friends, neighbors and customers to weather this storm so the restaurant industry can return more resilient than ever.”

100 percent of all donations will go directly to restaurant workers in need. Starting April 2, 2020, impacted restaurant workers will be able to apply online for a one-time, $500 check to use towards housing, transportation, utilities, child-care, groceries, medical bills and/or student loans. These grants will be administered by the NRAEF and offered on a first-come, first-served basis. For more information on donating to RERF visit RERF.US.

About Guy Fieri: Chef, restaurateur, New York Times Best Selling author and Emmy Award-winning TV host, Guy Fieri, is one of the world’s most recognizable and influential culinary stars.  In 2019, Guy received a star on the celebrated Hollywood Walk Fame, a rare feat for a chef. Guy began his love affair with food at the age of ten, selling soft pretzels from a three-wheeled bicycle cart he built with his father called “The Awesome Pretzel Cart.”  After selling pretzels and washing dishes for six years, Guy earned enough money to pursue his dream of studying abroad in Chantilly, France, where he gained a profound appreciation for international cuisines and further strengthened his passion for food.  He returned to the US and graduated from the University of Nevada Las Vegas with a degree in Hospitality Management.  Upon his graduation, Guy jumped headfirst into the restaurant business, ultimately opening his own casual dining concepts in Northern California.

In 2006, Guy won Food Network’s popular television competition show, “Next Food Network Star” and was awarded his own series, the Emmy nominated “Guy’s Big Bite.” Since that time, Guy has created a thriving culinary empire as host of top-rated TV shows including the iconic, Emmy-nominated “Diners, Drive Ins & Dives,” “Guy’s Grocery Games” and “Guy’s Ranch Kitchen.”  Additionally, Guy and his team at Knuckle Sandwich, LLC, have opened 75 restaurants around the world. On land and at sea, from the Las Vegas Strip to the Atlantic City Boardwalk, from South Africa to Colombia and from Costa Rica to Dubai, Guy’s culinary creations are enjoyed globally, every day.

This Giving Tuesday, Join Our Journey to Help Restaurant Workers Advance Their Careers and Futures