A Capitol Gingerbread House to Remember 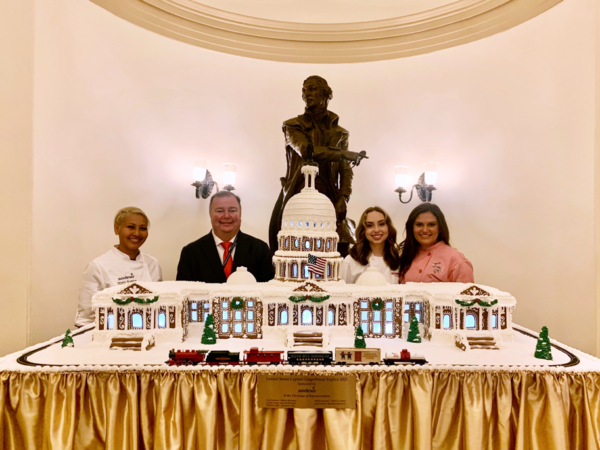 Molly, a two-time scholarship recipient from the National Restaurant Association Educational Foundation, wants to start her career at Walt Disney World in Orlando, FL. Molly aspires to have her own bakery one day where she can share her love of baking with others and hopes to inspire young women to join the pastry industry.

“I’ve never gotten to work on something this large scale before, so it was really cool to just see what it takes to undertake a project this large, and just to be able to put all the detail work that we did into it is really special,” said Molly of the major baking endeavor.

Faith graduated from the University of Florida with a BS in Behavioral and Cognitive Neuroscience, but realized her heart wasn’t in that area of work. After graduating, Faith changed direction to pursue her true passion, baking and pastry, by returning to culinary school. Now, Faith would like to turn her pat-time venture By Faith Baking Company into a full-time operation.

Faith was able to use some of her recent hands-on training at school to create the house. “What really helped is the entire gingerbread house is vegan. And we had just learned about how to make vegan icing in school the week before we came.”

Each year, the NRAEF awards more than $1 million in scholarships to individuals pursuing a post-secondary degree in the restaurant, foodservice, and hospitality industry. Since the program’s inception in 1987, the Foundation has awarded more than $26 million in scholarships to support the next generation of industry leaders. Scholarship applications for the 2023-24 school year open on January 15, 2023. Learn more here.

Recently, Chef Kisha was profiled on NBC 5 Chicago, where she discussed living her purpose as a mentor to young adults and kids who need a hand up in life.

Individuals pursuing a post-secondary degree in the restaurant, foodservice, and hospitality industry can now apply for more than $1 million in scholarships from the NRAEF.

During the U.S. Department of Labor’s National Apprenticeship Week, the National Restaurant Association Educational Foundation (NRAEF) is celebrating the growth of industry apprenticeship and the potential it offers for the future of the industry workforce. See our calendar of NAW events.

NRAEF joined other Apprenticeship Ambassadors at the White House for an event highlighting efforts to expand, diversify, strengthen, and modernize the nation’s Registered Apprenticeship programs.

This landmark research measures the DEI environment in the hospitality industry to understand the impact of DEI strategies on foodservice workers’ job satisfaction.